As mentioned previously, I’ll continue following certain companies even after divesting them as I think my in-depth knowledge about them is a competitive advantage. Also, I believe it’s far more advantageous to understand a company very well, rather than several companies on a superficial basis. In short, quality over quantity.

To summarize, the main points that I mentioned are:

With the recent release of FY16Q2 results, I went to analyze the results to have a sense of how the company is performing, and whether my predictions are on track. If they aren’t, I’d update my thoughts on the general direction of the company.

The good thing is that HLS’s financials are very easy to understand. Nothing complicated, and HLS makes the effort to explain certain movements in their balance sheet and items in their income statement.

Thus far, HLS’s financial performance, and the subsequent share price movement, is exactly how I’d anticipated it would be. No surprises here.

Earnings has dropped with the expiry of the dorm, and without any contribution from property development. EPS as of FY16Q2 is 2.44 cents, compared to 4.10 cents as of FY15Q2. This is on track to be within my full year earnings forecast of 4.5-6.5 cents.

As expected, revenue from civil engineering forms pretty much the entire revenue, with almost nothing from property development and investment properties (dorm).

There have been no positive surprises, or catalysts in FY16Q2. HLS continues to invest in the Shine@Tuas South dorm project, pumping in $8.7mil as of FY16Q2:

Finally, from a TA perspective, HLS share price continues to fall, albeit at a very gradual pace. Since my divestment at an ave of $0.375, HLS has dropped very gradually to the current $0.320.

I have no idea if it will continue falling, but barring any major contract wins, the share price is unlikely to rise substantially in the short to mid term.

The book value has dipped slightly to the current 43.4 cents as of FY16Q2. Although the valuations currently are not demanding, in my experience, builders generally can have such low valuations indefinitely.

On top of all this, what caught my attention is the “Results from a joint venture”

This item is also interesting to me because the other partner in this JV is King Wan, and having seen such a strong contribution from Skywoods, this gives me some visibility on the contribution for King Wan as well.

It’s like many pieces of the jigsaw puzzle falling in place, giving me an idea of how the overall picture would look like.

The one potential catalyst for the share price would be an announcement of a major contract win, beefing up the order books. Here, I am not optimistic that HLS will announce any major contract addition though.

Although the order books has dropped from $450mil in FY14, to $382 mil in FY15 and finally to $330 mil currently, HLS has seen years with much much lower order books.

From my experience in years of analyzing this company, HLS is a different animal from other typical builders. They focus on maintaining margins (which is what I loved about them in the first place), and are financially prudent.

However, this means that there will be troughs in the cycle where HLS suffers from a decimated order book, and instead invests for the future while awaiting projects which require their expertise and that they can capitalize on by demanding certain margins.

If you look at the share price chart since 18 mths ago, it sure looks like HLS has formed a bottom: 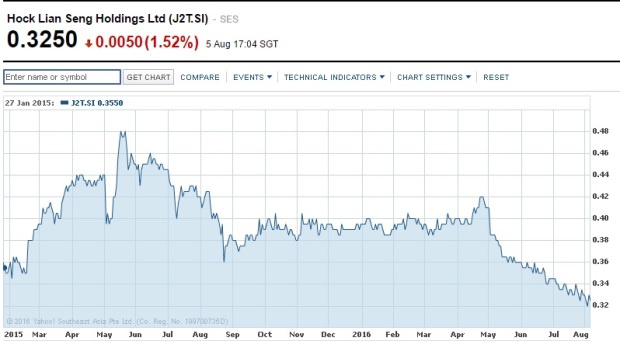 A word of caution for those who may try to bottom fish, if one looks at the big picture though, HLS suddenly doesn’t look like it’s that cheap anymore: 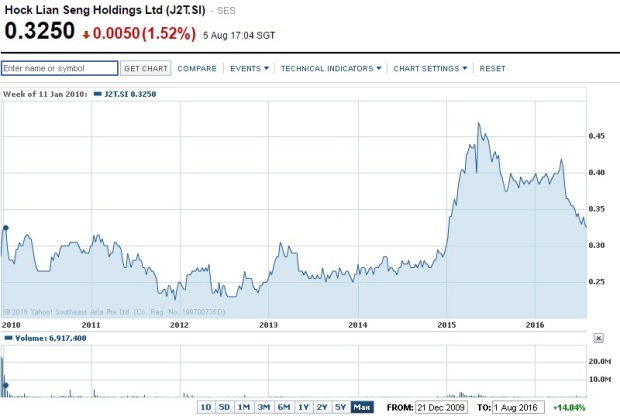 As of FY16Q2, the net of “contract work in progress” has turned negative.

The net work in progress is now -$5.6mil, compared to $10.3mil 6 months ago. This means that HLS has billed ahead of what they have completed building. This will have to be built in the coming quarters with no further billings / contribution to earnings.

Yet another indication of this “reinvesting” phase that I speak of is this 1 line in the statements:

“Increase in prepayment of $1.1 million was mainly relate to the advance payment of a land parcel acquired for construction of workshop for own use. The acquisition would be completed in August 2016.”

I consider this capex in nature. Meaning HLS has to invest to build up infrastructure, which would eventually somehow add to their earnings in future. Again, it does mean suffering in the short-mid term though.

Thus far, my initial hypothesis that the property sector moves in cycles and that HLS is currently in the “reinvesting” phase, stands true. There are no visible catalysts on the horizon, and I think the earnings will either drop below my predicted range after FY16 (without The Skywoods contribution), or barely maintain in the 4.5 – 6.5 cent range (I’m expecting contribution from  Civil Engineering projects to pick up as the projects enter the “active” phases).

The risk:reward profile currently remains unfavorable for me to reinvest in HLS. I’ll be looking out for contract wins, but from the current industry climate, and from my understanding on the profile of projects that HLS goes for, I’m not expecting any such announcement anytime soon.

As yet, I’m staying on the sidelines while waiting for the markets to recognize these headwinds, and for the share price to accurately reflect that.

Again, I’m constantly reminded that my focus (which has only been rather recent, in 2015 actually), is now on DEEP VALUE and on CONTRARIAN situations. Only longer term data will tell if this approach is truly successful for me.