What do these have in common?

Answer: Thanos, Tesseract, TTI, Thor are some of the most powerful characters/relics around…….

oh, oh, and also, all of them belong to the Marvel Cinematic Universe, the rights of which are owned by The Walt Disney Company since 2009, and of which TTI is a newly minted shareholder. (And still increasing my position gradually via options). Infinity Wars has also garnered $2bil in ticket sales worldwide… and counting.

The company garners $8bil in FCF every year, and what’s even better is that instead of distributing that in the form of dividends, the management has opted to increase shareholder value in the form of share buybacks. Dividend yield is thus low, at ard 1.5%.

Fellow investors with experience in US markets would know that we poor SG investors suffer a 30% witholding tax on dividends, so having a “high yield” dividend strategy in US markets is suicidal.

Share buybacks to return value would suit me just fine. There’s also a whole bunch of other DD stuff, such as their acquisition of Fox, ESPN+ turnaround, challenge to Netflix, relatively low PE, both comparing to peers and comparing to historical values and much  more. But that’s for another day.

I’m doing the half year portfolio review 1.5 weeks earlier, as I foresee I won’t have time to do it then.

In that post, I described how I’ve started hedging via shorting S&P and going long volatility, in a variety of ways. Since then, the markets have continued trending upwards, so it hasn’t been great for my hedges.

But rebalance my portfolio, I must.

As mentioned in the comments section of that post though, I’ve managed to keep the costs of hedging in check, by selling far out of the money options on both the long and short sides. I’ve also continued adding to my short hedges in the past month gradually, and I can tell you that that is an incredibly tough thing to do in that sorta environment.

This really does put a smile on my face.

I’d let the reports from Interactive Brokers do the talking.

In the last 2 days, the US portfolio portion (Excluding SG) shot up substantially on the back of Trump’s tariff talk, returning 1.71% in the past 7 days. Looks like I owe Trump a big Thank You.

And that’s as of yesterday. Right now, as I am typing this, volatility has shot up (VIX is up 15% tonight), indices have gone down like a rock (SPY is down 0.93%), so when the reports come in tomorrow, I’d expect the NAV to grow substantially.

Obviously, my US portfolio is net short right now.

The 1 month report may be a bit more illuminating:

I won’t go into specifics, but essentially VIX is not a fund or a note, so the problem I find is that you always gotta get the time frame pretty much accurately. Being too early or too late is no different from being wrong. It’s kinda like a 1 shot bazooka.

So, instead of buying my bazooka bullets myself, I fund the bazooka by selling VXX calls. Some are covered, but yea, some are naked calls. My bet is that it’s unlikely for VXX to go into the crazy high territory that we saw in Feb of >50. That only happened cos nobody was expecting it to go that high for a prolonged period of time. It’s kinda like nerve cells. There’s a refractory period whereby they can’t be stimulated again after a previous stimulation.

In this way, I didn’t have to really pay too much for my hedges. Oh and also, I sold several call options on indices such as SPY, whilst buying some put options.

The net summation of all that kept the NAV fairly constant, despite the running cost of hedging. OK, it was helped by positions in CTL, CHK and VRX, all of which have run up double digits this year. I’ve since sold out VRX completely, and CHK, mostly. 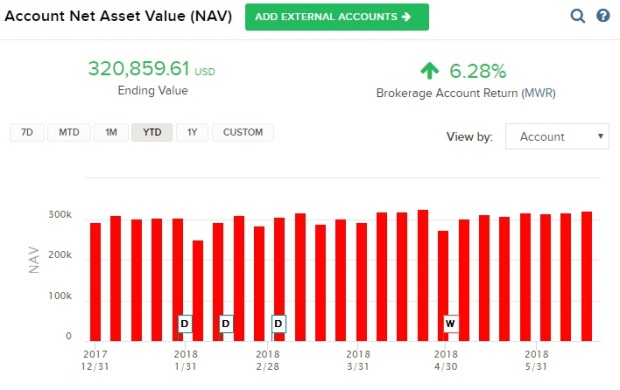 YTD, my US options activities have been pretty stellar.

6.28% doesn’t sound like much…. but considering S&P ETF has returned 1.94% YTD, I’m pretty happy. Plus again, indices are deeply red tonight while my hedges are going ballistic, so the divergence is going to be greater tomorrow. (The IB reports are delayed by a day)

Now, all this is just the US Options part though.

Long time readers would know that I’ve been testing and backtesting and modifying and implementing my options strategy for… 2 years now. Some of the previous posts regarding options are here:

There are more, but I didn’t categorize them so it’s all over the place somewhere ard here.

I think it’s time for me to shift more assets into international markets, particularly in US and HK, and especially since I’d prefer to put more firepower into my Options machinery. I think it’s very likely that SG will eventually be a negligible part of my portfolio. (Equities-wise that is)

YTD returns for SG portfolio hasn’t been great though, and although I don’t split them up to analyze per say, common sense tells me it has been poorer than the options portfolio and probably even negative, since the portfolio total returns is much lower than 6.28%.

Inclusive of the dividends distributed in Feb, the ETF has been negative thus far YTD, returning -2.33%.

The increase comes mostly from cashflows from US options activities, the strengthening of the USD against SGD in Q2, a capital infusion, dividends collected and the addition of some bonds, offset by the drop in the NAV of the SG portfolio.

Overall, can’t say I’m too disappointed with the results thus far. It’s not eye popping, but it’d do for now.

Going forward, updates here are going to be rarer than the dodo bird cos I’ve recently accepted a new consultancy role.

Healthcare in the region must be doing very well, cos I received 2 unsolicited and separate offers to do consultancy work for 2 unrelated SMEs in neighboring, developing countries. What a coincidence.

I’d only talk about 1 cos the other 1 is not really finalized.

The problem for them though, is that, healthcare is a very specialized business. It’s not like F&B, or manufacturing. You can’t just jump in with capital, without know-how. You wouldn’t even know how to start.

Look at our local healthcare companies. It’s not a coincidence that the top honchos, management, founders etc are all Drs. RMG, SMG, Q&M, Singapore O&G etc. You can’t just throw capital in and hope to grow a whole new healthcare arm.

The thing is, I’m not very interested to be involved tbh. The role would require quite a fair bit of travel, albeit short trips, to a certain neighboring country. As it stands, time is a premium commodity for me. I don’t really wanna do anything that involves travelling for work. (Travelling for fun is a separate class on it’s own and has been granted political immunity from persecution)

Sides, I don’t speak their language, and they don’t speak English either. Having an interpreter around 24/7 isn’t fun. There’s no privacy and it’s a bit irritating to have to pause at every sentence.

But I’m no good at dishing out rejections outright, so I did the next best thing.

I quoted a crazy fee. Or so I thought.

It has to be crazy to justify taking time off my own current work, wasting precious waking hours planning, and the hassle of travelling on weekends. And yes, it is a developing country, so we’re not talking about some glam, luxurious destination. Plus I’ve previously agreed with my wife that weekends are “Family Days”. They’re untouchable. Now, I’m touching 2 of them every month when there’s only 4 to go around.

Yet, they accepted, albeit with a bit of negotiation here and there.

The funny thing is, now that I’m given this new task, I’ve taken time to sit down seriously and look into it. It’s really quite similar to doing DD for an investment.

You sit down and dig out as much information as you can about the local industry, about its prospects, the regulations, the competitors and what they’re doing etc. Then you formulate a plan for the business.

Obviously, I know what the shareholders would expect, seeing that I’ve a ton of experience on both sides of the fence – management vs shareholders.

The thing is, after spending a few weeks doing the DD, I’ve figured that……… it just can’t be done. Not in this current state anyway.

It’s a developing country, and costs there are literally a fraction of that in SG. The same staff, doing the same role over there, costs 1/10th to employ there vs here in SG. No exaggeration. It’s really 1/10th.

That’s good news right? But it cuts both ways.

Relatively low costs also means that the cost of services there is low. Expected revenue is also a fraction of that in SG. Yet the business would be saddled with high consultancy fees payable to yours truly. And that’s in SGD terms. So revenue is going to be in their local currency, whereas the “staff costs” would have 1 big fat item in SGD, and that’s going to eat up… more than half of their entire revenue every month. Maybe more.

The business is just not going to be competitive enough to turn a profit anytime soon… ironically, cos of me.

Every new venture has start up costs. But the costs here (again, due to me) would easily eat up profits for the next several years, so I don’t know what’s left in it for the shareholders. I don’t want overly optimistic guys eagerly expecting me to perform magic. I wouldn’t want to be the asshole who pockets other people’s investing dollar knowing fully that there’s nothing on the table for them for many many years to come either.

So after looking into the numbers, despite having the contract all done and dusted, I went back to the guys and offered voluntarily, to lower my consultancy fees. It still can’t be too much lower, cos then it’d be unfair to me.

Anyhow, those guys must be very impressed, cos now they’ve offered to increase the duration of the contract with the lower fees, such that the net quantum remains the same. I’m not sure if that’s a good thing for me.

Or maybe, I’m thinking too much. In reality, privately, they think this Singaporean guy is really dumb.

And if you haven’t figured it out yet (man, where have you been?!), the title is a paraphrase from Thanos.