It took me almost 2 years to fully divest all my shares in BBR Holdings, but as of today (09/11/2018), FINALLY! Someone took the remaining shares from me so… for the 1st time in… 5 YEARS (yes, I’ve been an unfortunate shareholder for 5 years), TTI is no longer holding a single share in BBR Holdings.

Well, I’ve written extensively about BBR Holdings, so I shan’t go back to talk about it much. At 1 point, I was holding over 2.3mil shares in BBR Holdings, and managed to divest just over half in 2017 at near it’s multi year peak. Unfortunately, with such a large stake in an illiquid company, it’s hard to divest quickly, and it took me almost the entire of 2018 to sell off the remaining.

Overall, it has been a slightly profitable investment quantum wise, if dividends are included, but ultimately, an absolutely terrible investment %-wise, considering how the markets have performed in the past 5 years. Lotsa underperformance here, when compared to a passive index.

Anyway, some dude or entity or institution has been quietly supporting the share price. I know cos some dude will buy just 1,000 shares from me within the last trading hour, covering the humongous spread. It’s an obvious attempt to support the share price. Why so, I have no idea, so you guys can postulate. I’m guessing maybe it’s gotta do with the $0.2 MTP requirement.

BBR Holdings has dipped under this $0.2 share price for quite some time (thanks to a determined seller, yours truly).

Or it could be some poor soul trying to prevent margin calls. Good for you cos I’m outta way! The selling pressure will ease for sure, cos for the past several months, I’ve been setting the tone for the selling pressure (approximately), but of course, without going that low.

OK, lastly, this has nothing to do with BBR per say, but it just so happens that I’m renovating one of my properties that has built-in PBUs. (prefabricated bathroom units). And it’s a NIGHTMARE to do so! Buyers be warned! I’m so avoiding PPVC and PBU in future. The contractors say it’s very difficult to do so and gave a ton of reason. Only very superficial cosmetic work can be done.

But if you want to say, hack the tiles, or change the entire window with the frame, it can still be done, but is very costly. I dunno if I’m being hoodwinked, but that’s what I’m told. Like changing the window frame of the PBU would crack all the surrounding tiles, and matching tiles are not available so you’d have to change ALL the wall tiles and stuff like that. And I’m told these issues are specifically relating to the fact that it’s a PBU.

Last word: You know how shitty the company is, when a long time large shareholder feels THIS elated after selling out of the position altogether. Feels absolutely great. I’ve a lot of ideas for deploying the capital now. It almost feels like I’ve just gotten out of an abusive relationship!

1st up, note that TT Fund is not = my personal fund. But I retain all rights to invest it as I deem fit.

In my last post, which was barely what, 2 weeks ago?, TT Fund’s ROI has changed dramatically. And I mean dramatically. 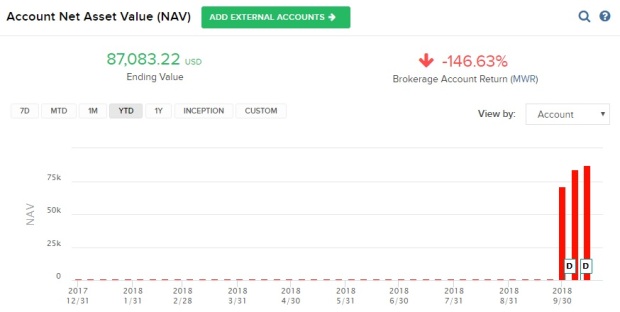 I got a little kick out of writing about it actually. It’s kinda funny.

That’s what a short term MWR can do to you. How is it possible to lose more than a 100%, but it is what it is. Hey man, I don’t do the calculations.

Even the TWR as shown in the previous post, was terrible:

“It’s still early days, I was unlucky in timing, but it’d sort itself out in the longer term. The gains will stack up with time, so I’m not too worried. The quantum itself is small anyway. Luckily I’ve only deployed about 25% of the TT Fund’s funds.”

That’s what a couple of brave bets in the midst of volatility can do for your portfolio. Wonders. A >160% reversal in 2 weeks. That’s like Liverpool coming back from 3-0 down to win the Champions League 4-3 with a last min goal in the 94th min.

This crazy episode packs some lessons though:

Even TTI’s personal fund did pretty ok throughout the volatility of the past 2 weeks: 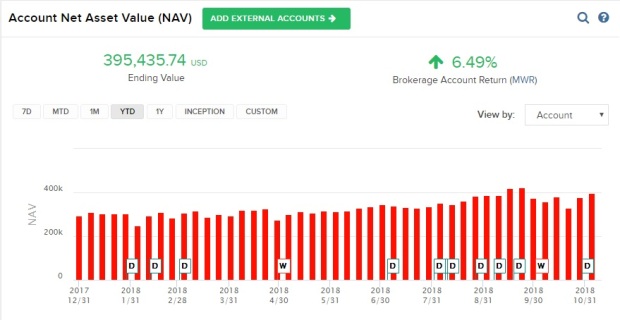 That’s slightly up from the 6.03% I posted 2 weeks ago. (TTI’s Personal US Fund + TT Holdings Fund Results YTD)

Yet in this 2 weeks, the MWR actually went all the way to negative (albeit just barely), before going up to 6.49% right now. So that’s how volatile it is. Imagine I freaked out and “cut loss” when it dipped into negative territory. I guess I’d be singing a very different tune today.

The bulk of the returns came from long bets in Broadcom (AVGO), Bausch Health (BHC) and Centurylink (CTL). I was also very much long volatility (VXX) at the start of the market weakness, and took the chance to offload VXX positions and at the same time, swing to shorting VXX (not directly, but indirectly by selling naked calls)

For BHC in particular, I got real lucky and went for broke in both TT Fund and TTI’s personal fund, at the exact bottom, betting that the quarterly results will again surprise the markets. Feels good to beat Bill Ackman in this instance. LOL.

I’m not thinking that everything’s hunky dory though.

Thus far, TT fund has short positions in 2 names: Herbalife (HLF) & JD.com (JD). They’re not direct shorts, but short positions in the form of sold naked calls. None of the calls have been exercised, and all have thus far at least, either got covered profitably, or expired uneventfully. These are whatever’s remaining:

I had some shorts on Tesla as well, but quickly covered those and stayed out as I’ve come to realize that the financials don’t quite matter for Tesla. The company can be crap, I can be right, and still lose a ton of money. Simply cos a large premium baked in Tesla’s share price is EMOTION.

It doesn’t have to be fundamentally supported. It just doesn’t make sense. It’s emotional. The crowd loves Musk. Even I love Musk when I was short Tesla tbh. All that talk about Tesla’s negative cashflows and repeated capital raising, is missing out this vital point: Musk himself is Tesla.

I betcha if Tony Stark and Stark Industries were real… anyone shorting Stark Industries would be dead. Completely dead. Imagine this: Aliens invade New York, and after Stark destroyed their mothership…. imagine the news headlines!

Never mind that the company would probably have had to take a massive write down in the number of suits destroyed. Their missile inventory would’ve been depleted, NAV would’ve taken a massive hit, and future CFs would’ve to consider replenishment of inventory and “spare parts”.

Plus Tony would get more paranoid and probably allocate 99% of the revenue into R&D to get the new nanobots suit that we see later when Thanos came. So we know the R&D expenses and the SG&A expenses would shoot up.

But I’m pretty sure the share price would go ballistic.

So there. This is a perfect example of Tesla.

And BTW, I think Tesla’s reported positive CFs in the latest quarter is not sustainable. Markets are going to be sorely disappointed if they think it’s hunky dory from here on.

(Or u can ask Thanos when he’d be arriving. And I’d say, prob short Tesla/Stark Industries just before the aliens invade, and cover quickly and go long at the peak of the invasion, since u know that the avengers would always win and the jubilation from the win would sky rocket the share price after that.)

Greenlight Capital’s Einhorn made the massive mistake of looking at the financials. Of being value focused… in a situation whereby the whole world isn’t. And would likely not be anytime soon.

I think Einhorn’s not wrong. In fact, I think he’s very right. But I also think he’s going to lose a lot of money being very right. And therein lies my deepest thinking:

One doesn’t have to be right to make a lot of money. It’s a complete fallacy.

One just needs to be very much different from everyone else, and THEN, have everyone come over to your different opinion. And preferably come over real soon after you’re ready.

Right now, I’m looking real deep at a 3rd short idea. I’d probably start selling calls on that, thus far, it checks all the boxes. Perhaps I’d write about it when I’m done.