In medicine, clinicians have to practise evidence-based medicine.

What does that mean?

It means you can’t just carry out a procedure or a treatment, based on your mood, your personal beliefs or what you personally think will work, even if you have strong personal grounds to believe it’d work, or even if you have good intentions.

You get into trouble for doing that.

Good intentions, no matter how pure, is not a defence.

Everything must be evidence based, that is, based on literature from research work done by heroes who devote their lives to doing research, all for the betterment of mankind. (I say heroes and I genuinely meant it, cos most research work is actually relatively poorly remunerated, with a lot of hard work. It’s just shitty work IMO, despite how much the gov tries to promote it and all the life sciences nonsense.)

Amongst the different levels of evidence, there’s the gold standard at the top, the double blinded randomized controlled trials (RCTs). That’s like the strongest evidence.

Then there’re also the case reports, which are great for learning from fellow colleagues, but may not provide very strong evidence. Still better than relying on your personal beliefs.

Over at IN, I have made 5 estimates: 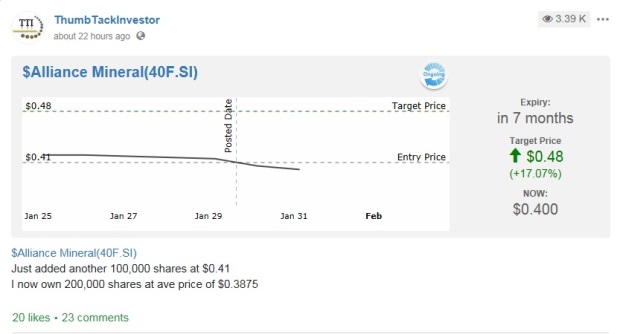 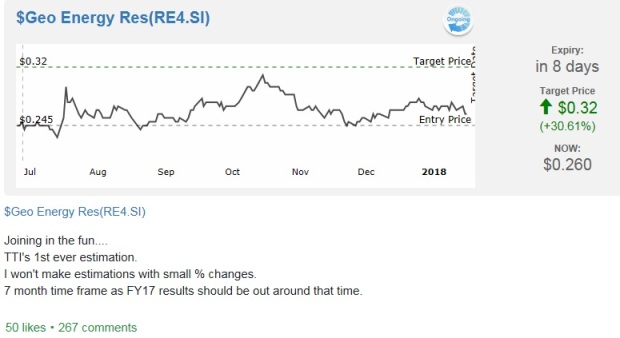 And the cumulative result of these 5 estimates are:

(Please don’t bother to join IN to follow me, I don’t think I’d be making estimates that often anymore.)

Of the companies that the 5 estimates involve, 4 of the estimates are done with lots of loving care, due diligence, seriousness and are evidence based.

The last 1 was done somewhat as an experiment, with next to zero research, with callousness and I think I spent a grand total of 15mins looking at it.

Hazard a guess, which is the one with no effort put in? No prizes for guessing.

TBH, I don’t really know what BlackGoldNatural is doing right now. I roughly know they’re in the coal industry from my work with Geo Energy, but that’s about it. I made the estimate after reading 1 solitary article about them winning some contract.

And THAT, is why casual, read-the-news-and-invest, is suicidal.

(well, my estimate for Geo Energy hasn’t hit the mark, but for all practical purposes, I’d consider it has, since it rose as high as $0.31, just barely below my $0.32 estimate. Plus I’m deeply in the money on this one, having gotten in right from the start when it was unloved)

Finally, let me give just 1 more “case report” as evidence.

Sometime in Nov (2 months ago), I posted my investing thesis for Shinsho Corporation:

In my most recent post, I said that this week is exciting, as the major steel makers would be posting results.

And THIS, is what Shinsho Corporation did today (at the time of typing this):

With this, my large core position is looking real pretty today, with an approximately 24% gain or so in the past 2months++.

And that’s not taking into account Fx gains, which has fortunately, worked out in my favour as the JPY strengthened of late. That’s gonna add a few more % points to that 24%.

I think Shinsho Corporation was a classic case of contrarian investing: Having the balls to take a position when the world says no. Right after I built my position, even more of the world said no. And as late as just a few weeks ago, naysayers continue to think that there isn’t much value left to capitalize on.

Today, things have swung to my side, as a bit more of the world is starting to recognize what I saw 2 months ago.

Yet the difficulty in contrarian investing, lies in truly believing that you’re right while the general market is wrong. That’s something very difficult to do, especially if the share price continues to move against you. Afterall, we validate our investing prowess by the share price.

IMO, the only way to really stand firm in the barrage of dissenting information and opinions, is to know what you’re investing in, and know it better than the other guys.

Even with the massive jump today, Shinsho’s share price is still a tad below what I deem to be fair value. But I’d have to reassess it again tonight or over the weekend, cos global markets are looking shaky of late, there may be some better opportunities thrown up elsewhere that’d warrant deployment of capital.

I’d like to see how STI ETF can beat SG TTI this quarter; I’d really have to screw up big time for the next 2 months for that to happen.